This Is What Happens When A Drone Propeller Hits Flesh

How much damage can a tiny drone propeller really do when it comes up against a person’s flesh? Aalborg University in Denmark has answered that question with a rig that can ram a spinning drone propeller into a piece of flesh at 33mph.

The video below is an accurate (and slightly gruesome) demonstration of what could happen if you lose control of your drone and it hits a person, propeller spinning…

This Is Why You Should Be Careful With Your Drone

It is becoming more and more of a common occurrence: Firefighters battling massive wildfires are forced to suspend aerial firefighting efforts because of unmanned aerial systems, better known as drones.

With California in the midst of a very serious drought and fire season turning from a summertime to a year-round threat, two legislators in California, Senator Ted Gaines and Assemblyman Mike Gatto, have introduced a bill this month that would, “charge offenders a vastly increased penalty for [impeding firefighting efforts] and will also consider adding incarceration as a penalty when the offense involves unauthorized drone use,” according to a statement released on Senator Ted Gaines website.

“Drone operators are risking lives when they fly over an emergency situation. Just because you have access to an expensive toy that can fly in a dangerous area doesn’t mean you should do it,” said Assemblyman Mike Gatto. “The legislature needs to act swiftly to make sure we send a signal that our society won’t put up with this nonsense after seeing drone operators once again interrupt firefighting efforts.”

This sentiment was echoed earlier this month in a speech by Shawna Legarza, Director of Fire and Aviation for the U.S. Forest Service’s California Division, at a joint press conference with Cal Fire, the National Park Service, and the California National Guard.

“Wildland fire response in California is not just one agency, it’s all the agencies together, so federal, the state, the county, the city, the local government, the National Guard, the volunteers,” stated Legarza. “Getting all those agencies to work together can be hard enough, but the increasingly common problem of drones flying into fires makes it even more difficult.”

These calls for action come following FAA issued regulations introduced in February for drones. Unfortunately, drone users seem to be unaware of the regulations to which they are expected to abide.

Just this past Friday, July 17, officials said five drones hovering in the area delayed firefighters from dropping water buckets from helicopters onto a fast-moving wildfire that crossed a freeway between Los Angeles and Las Vegas.

Eric Sherwin of the San Bernardino County Fire Department told CNN, “Fortunately, there were no injuries or fatalities to report, but the 15 to 20 minutes that those helicopters were grounded meant that 15 to 20 minutes were lost that could have led to another water drop cycle, and that would have created a much safer environment and we would not have seen as many citizens running for their lives.”

In comments to the New York Times, Rich Hanson, the director of the Academy of Model Aeronautics, a nonprofit whose members fly model airplanes, shared his opinion on drones and those individuals who are piloting them.

“These [drones] are being sold by the thousands, and many of these people buying them are not traditional modelers, and they are certainly not aviators.”

Hanson continued, “These people have no idea that the FAA even exists, let alone what the regulations are. They are just having fun and looking for some kind of self-aggrandizement or some fame on YouTube.”

In an effort to educate drone owners, drone industry leaders have launched a campaign and website called Know Before You Fly to raise awareness of the FAA regulations for drones, and to provide a resource for questions regarding drone safety.

If you operate a drone, be sure to follow all FAA and other UAS regulations. 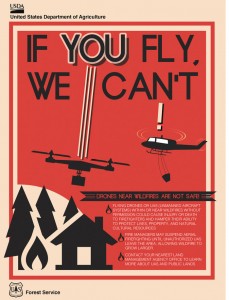